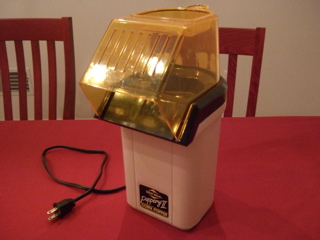 
I recently won a West Bend Poppery II Air popcorn popper on eBay.  This is known as a DIY Hot Air coffee roaster.  The Poppery II can roast coffee straight away  without any modification. But if you have a bit of skills to modify it, it's relatively easy to make a few mods that allows you to control the temperature and roast speed.


Engadget.com has a nice article How-To: Make a popcorn popper coffee roaster which has lots of pics.  The Homeroaster.org site has a very informative thread called Help with PII wiring .
Garybt3's blog site has an excellent article 7 steps to hot rodding a Popcorn Pumper . The Pumper is another model made by West Bend that has virtually the same innards as our PopperyII.
There's a good instructable listed at instructables.com, too.

The hot air popper that makes such good popcorn also works extremely well for small batch roasting of your favorite coffee beans.  The chamber is like this. Bought all these tools at Ace Hardware and at Radio Shack. 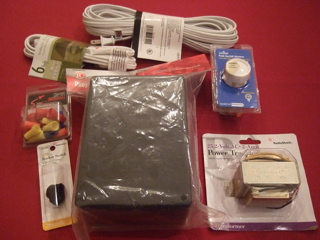 
Detach black lid by removing 3 screws, also squeeze restainer and pry it out. 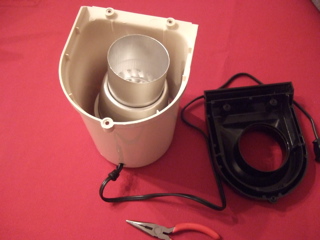 The bottom of the chanber. There is a motor attached on it. 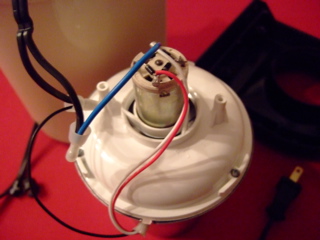 Take a look at the top of the motor briefly.  Notice the four diodes in a rectifier bridge on top of that connect to the motor contacts.  This rectifier bridge converts the AC power to the DC power required by the DC powered motor installed in this unit.  This in the second major difference in the Poppery II model from the original Poppery. 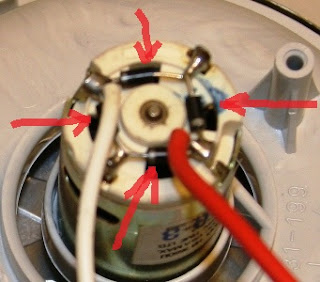 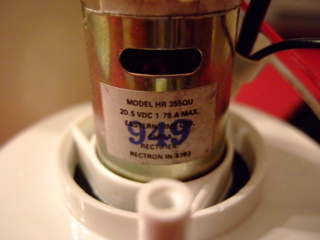 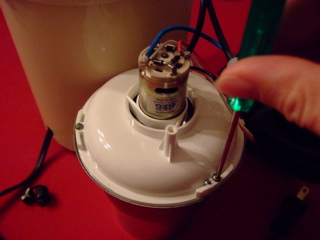 Open the lid with the motor. 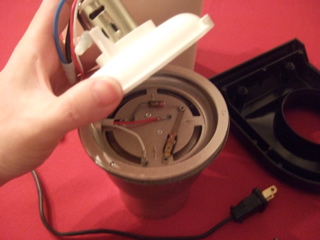 Remove 2 rings.  HINT:  Make special note of where these rings go and connect.
There is a quiz coming in an hour or so after when you ready to put this all back together!! 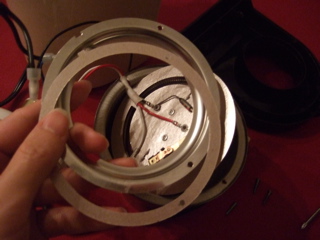 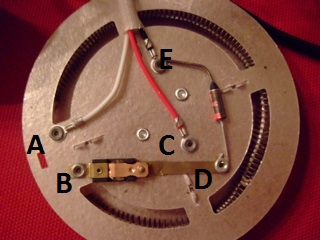 The primary heater coil is stretched around the outer circumference of the sandwhich of two fireproof disks and connects from point A to point B.

The secondary heater coil is stretched around the INNER circumference of the sandwhich  and connects from point C to point D.
The thermal protection switch connects point B to point D.
And the thermal fuse is connected between point D and point E. 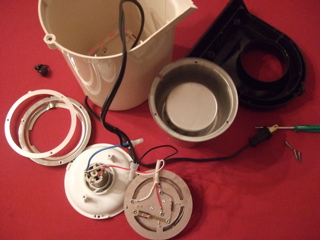 This side view shows the heat coil in the head section. If you look closely you can see the primary on the outer edge and the thin secondary coil inside through the slots. 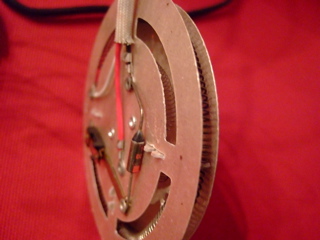 The bottom of the aluminum chamber. The hot air enters from the sides, allowing the beans to heat evenly and rotate. 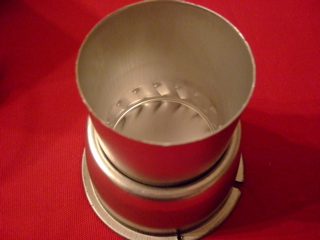 The top of the aluminum chamber. 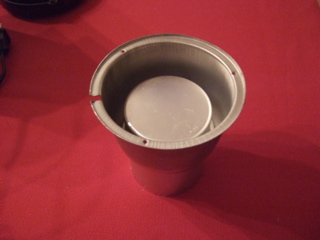 Remove the wire connector.  In my PopperyII there were three sets of wires crimped together. 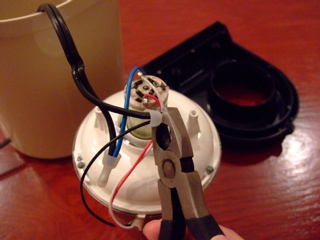 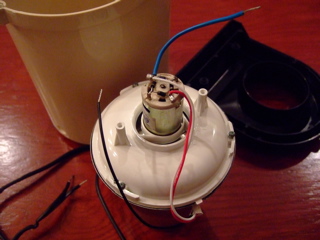 Remove the tiny metal from the thermostat to disable the thermostat. Take a small precision flat head screwdriver and lift the left end of the center copper strip and remove the shiny silver disk inside (it's the small football shaped metal piece on the tablecloth). 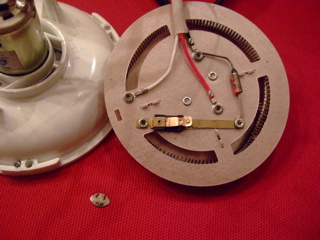 NOTE: The following is for INFORMATIONAL PURPOSES ONLY, it is not a recommended mod to your popper as it defeats both thermal safety mechanisms.
This popcorn popper is designed to operate at approximately 300 degrees F to pop popcorn.
Coffee is roasted when the beans' temperature rises to 435-450 degrees F.  The roaster may not roast properly with these safety mechanisms in-place. 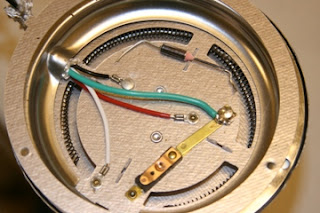 On my popper, I used a small precision flathead screwdriver to uncoil the leads of the thermal fuse from both rivets.  I them added the GREEN wire shown in the picture above and soldered the wire after wrapping the twisted strands around and under the rivet.
There is no need to remove the thermal safety switch once the bimetallic strip is removed (as shown in the previous picture).  The remaining black wire is no longer used and should be clipped once you get all the wires joined.

This is a simplified schematic of the stock PopperyII.   Most poppers are built with two heating coils. One  is used to reduce the voltage powering the fan motor. Sometimes one of the coils has failed, so test the popper to make sure it gets hot enough to pop popcorn. If the test resulted in a nice snack, it's probably in full working order.    Updated 8/9/2013 thanks to a catch by Dale.

Here's a new schematic and a wiring diagram for this mod to separate the control of the heater coils and fan.
When the project is done, the popper will have two separate circuits. The dimmer will be used to control  the fan, while the switch will turn the heating coils on and off.

Radio shack sells a couple of 25.2 volt center tap transformers. Make sure to get the 2.0 Amp version. If you pick up the 450ma version, the fan on the popper won't go fast enough (and the transformer will get pretty warm). Get an four gang plastic electrical box to mount the switch, dimmer, and transformer in. 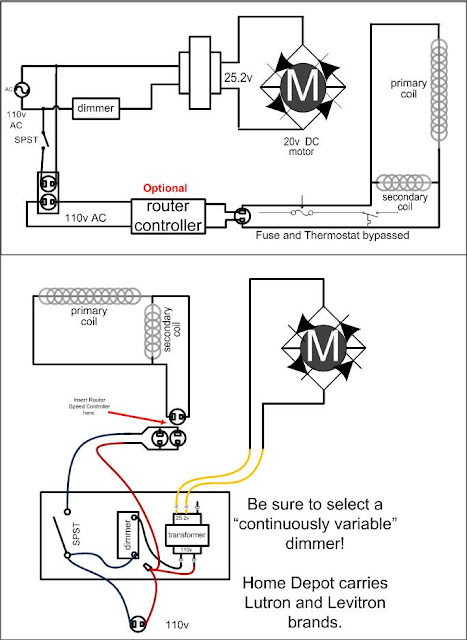 I included an optional Router Speed Controller in the electrical schematic.  I'm told they can sometimes be found on-sale at Harbor Freight.  I notice them listed on EBAY for ~$30.00 with free shipping.  The Router Speed Controller is a low cost way to get some control over the power to the heating coils - perhaps better control than turning the power switch on and off.


With the green wire added to the heating coil as described above, you're ready to reassemble the motor and heating coil assembly onto the aluminum housing.  I missed a couple picture opportunities but here's where the TEST comes in to play.


Once assembled, connect the white (primary coil) and red (secondary) together with one of the original cord's leads. The green return wire is connected to the other black lead from the original power cord.   (NOTE: I used green only because it was handy -- this is NOT a green ground wire.) 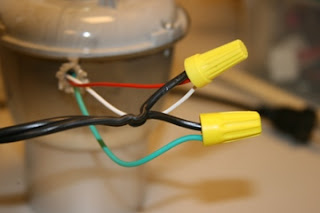 In this picture you can see the white extension cord wiring coming up out of the popper's plastic shell (threaded through the same hole as the black power cord..  This wire will power the fan motor in our new circuit.  The two wires on the top of the fan motor are connected in twist caps to the new white power cord.


There are a couple of wire to wire connections. You can twist these together  and use wiring nuts, or solder them and insulate them with electrical tape or quality heat shrink tubing. 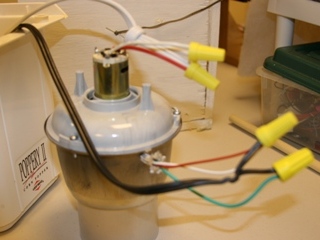 You may notice a knot in the new white power cord which should act as a strain relief.


Mount the switch, dimmer, and transformer into your four gang box.


You need four total or two pair of wires from the popper to the control box, and a pair of wires leading to a power plug. The 16 gauge extension cord I used had a three prong plug - meaning it included a ground wire. Keep in mind that green is used for a safety ground in AC wiring. If you're using a cord with a three prong plug on it as I did, the other two will be the 'hot' wires.


NOTE TO SELF: correct your wiring diagram as you used green for the power wire, dummy. 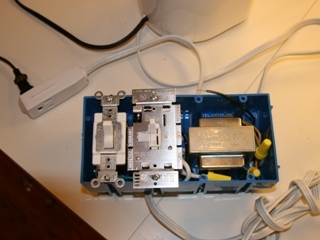 Switch of the left control the heating coils. The center switch is a continuously variable dimmer with an on-off switch. I mounted the transformer on the right; there's no magic to this order so feel free to be creative if you're so moved.


Here's the completed wired project. I attach a one (1) two gang light switch cover and one (1) blank cover to finish it off. 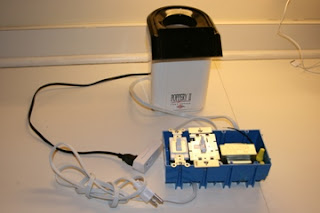 I plan to check a couple nearby thrift stores to search for glass oil lamp thingies to act as the chimney for this roaster. The chimney prevents the roasting beans from being blown out of the roaster as the original popcorn design encouraged.  Right now I have a Hormel chili can duct-taped on top of the black top plastic piece.


------
Here's an additional mod recommended by Garybt3 on his site 7 steps to hot rodding a Popcorn Pumper.

Gary's idea is to enlarge the hot air slits you see in the bottom of the aluminum chamber.  His technique doesn't work easily on the PopperyII as the aluminum shroud comes down more and you cannot enlarge the "scoops" from the underside.

So here you'll see two indentations made by the edge of a long screwdriver as I pushed the soft aluminum at the top and bottom to achieve the desired enlargement of the scoop.  Do it all the way around for every opening. 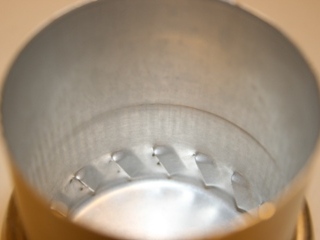 It's a bit hard to see in this picture from underneath as the flash didn't catch it, but you can make out the bumps of the new "air scoops" and you can see light through at least one of them. 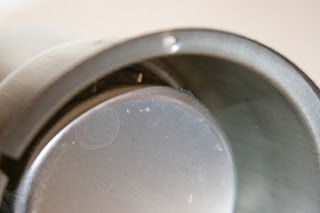 I have not seen anyone else discuss this "air scoop" mod so I believe credit goes exclusively to Garybt3.

I'll add a picture when I find and install a glass chimney.


If you care to send thanks, please consider sending green KONA coffee beans.